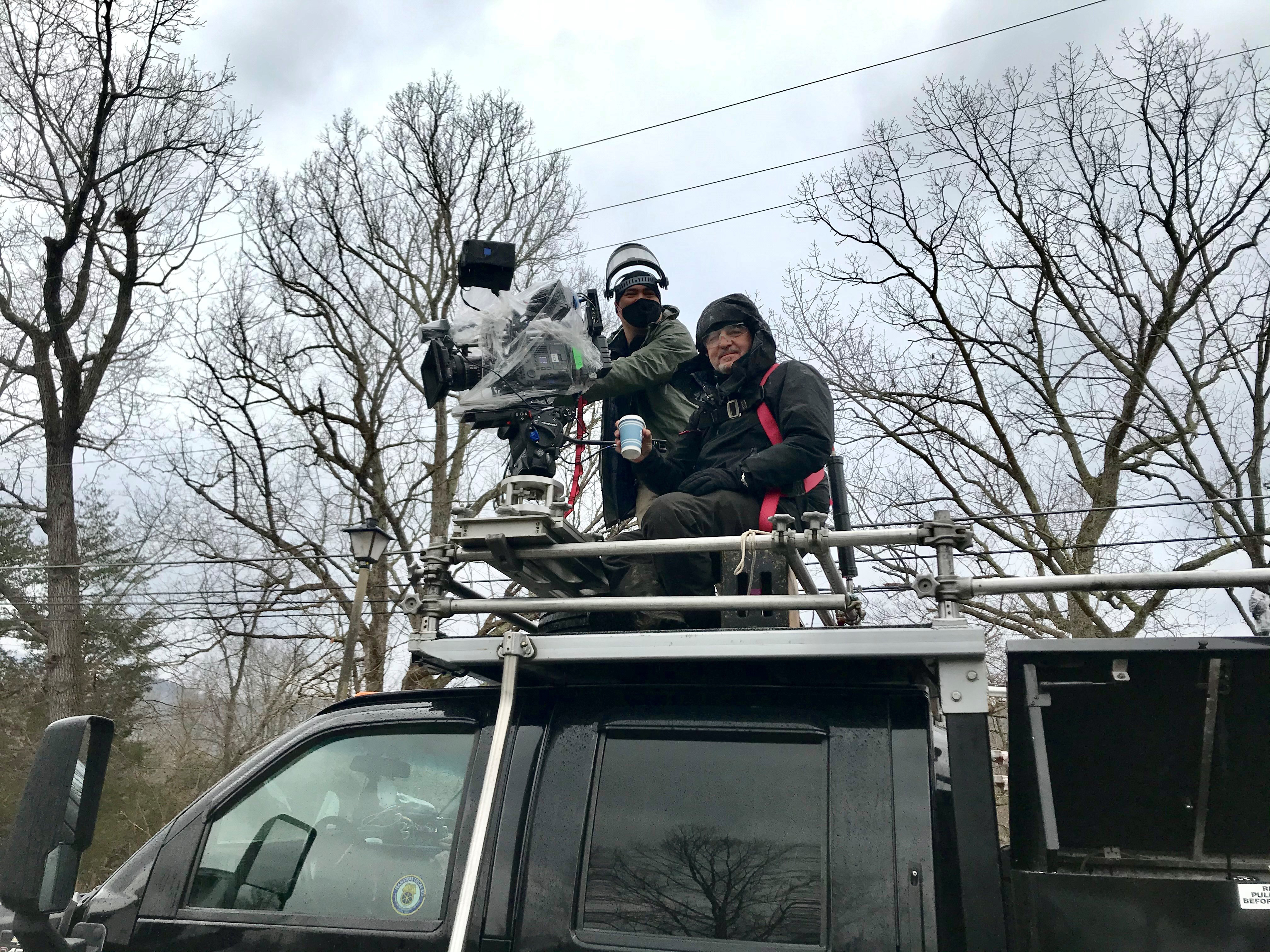 Bringing a harrowing real-life story to the screen demands the lightest possible touch of Hollywood’s usual hyperreality. Hulu’s Dopesick, based on Beth Macy’s book, tackles the background to America’s opioid addiction crisis, and must walk that fine line between informing and entertaining its audience. Cinematographer Checco Varese, ASC, used ZEISS Supreme Prime, Cinema Zoom and Supreme Prime Radiance lenses with the large-format Sony Venice in its 6K large format mode to bring a careful balance of style and substance to all eight episodes.

That balance is reflected in Varese’s own history, which includes not only crowd-pleasing features such as It: Chapter Two but also the grimmer circumstances of the real world. “I was a war correspondent for fourteen years,” he begins, “so, every time I see the world, I ask myself the same questions. Why is this character doing this, and without judging, how do I explain why? In this case it was even more critical because we had to be accurate.” 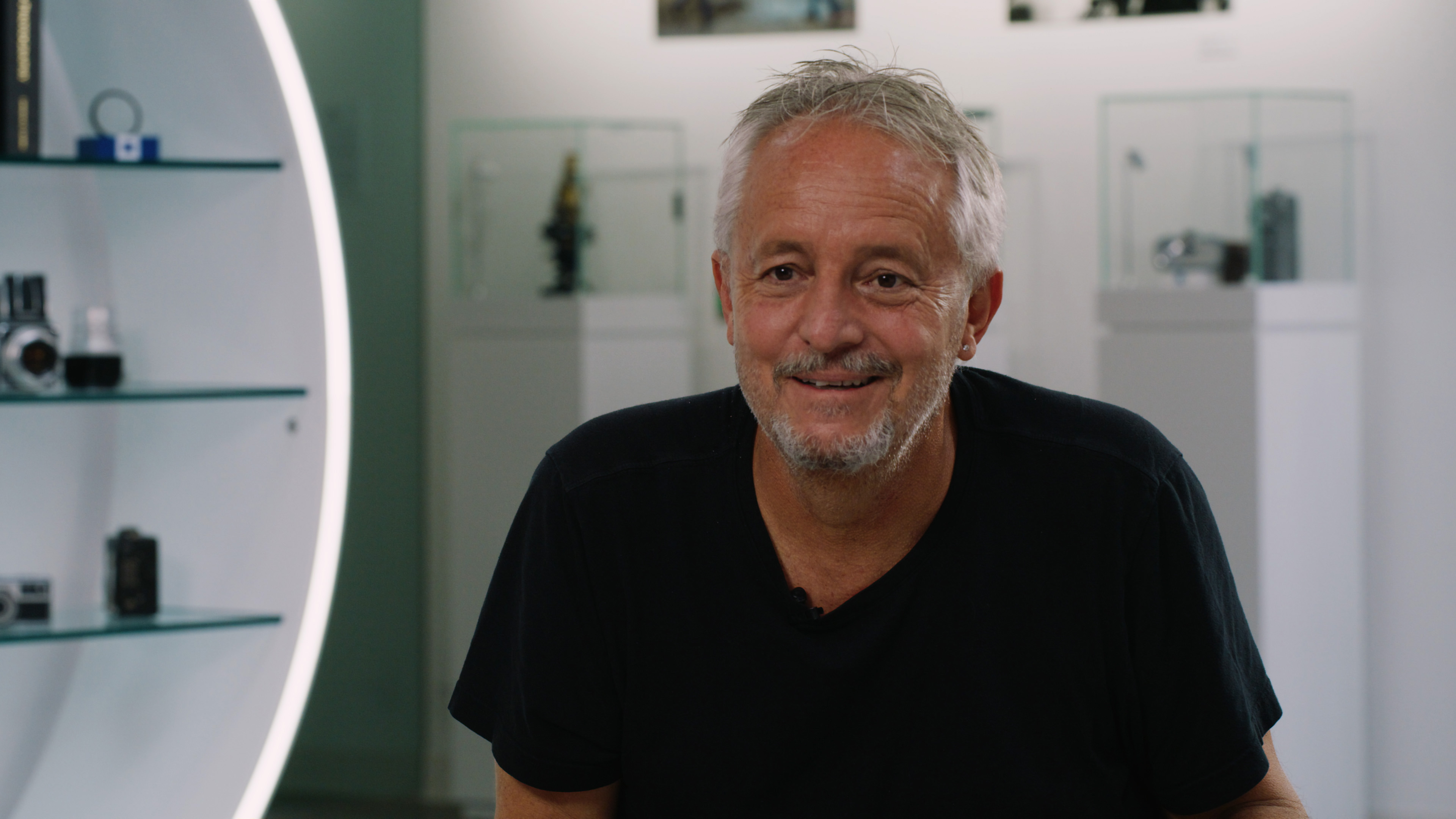 At the same time, Varese goes on, Dopesick is “not a documentary, not a newscast. It needed to be away from the realism of a documentary, but it’s about real people and it needed to be done in a very realistic way, without gimmicks that would take the audience out of it. That’s why the choice of lenses was so important. What the Supreme Primes do is to transmit reality – through the glass, to the sensor, then to the television. There are other lenses, lenses that are vintage, that add distortion… we tested several other lenses and I thought the Supremes would give the show a unique pristine, non-affected look.”

Alongside showrunner Danny Strong and Barry Levinson, who directed several episodes, Varese designed his approach around three groups of characters in “three circles. There’s the world of the victims which is one, the second circle is the civil servants, the prosecutors, the DEA and the lawyers who are finding out what’s happening, and there’s the third circle of the pharmaceutical people. Those circles intersect, with OxyContin in the middle.” 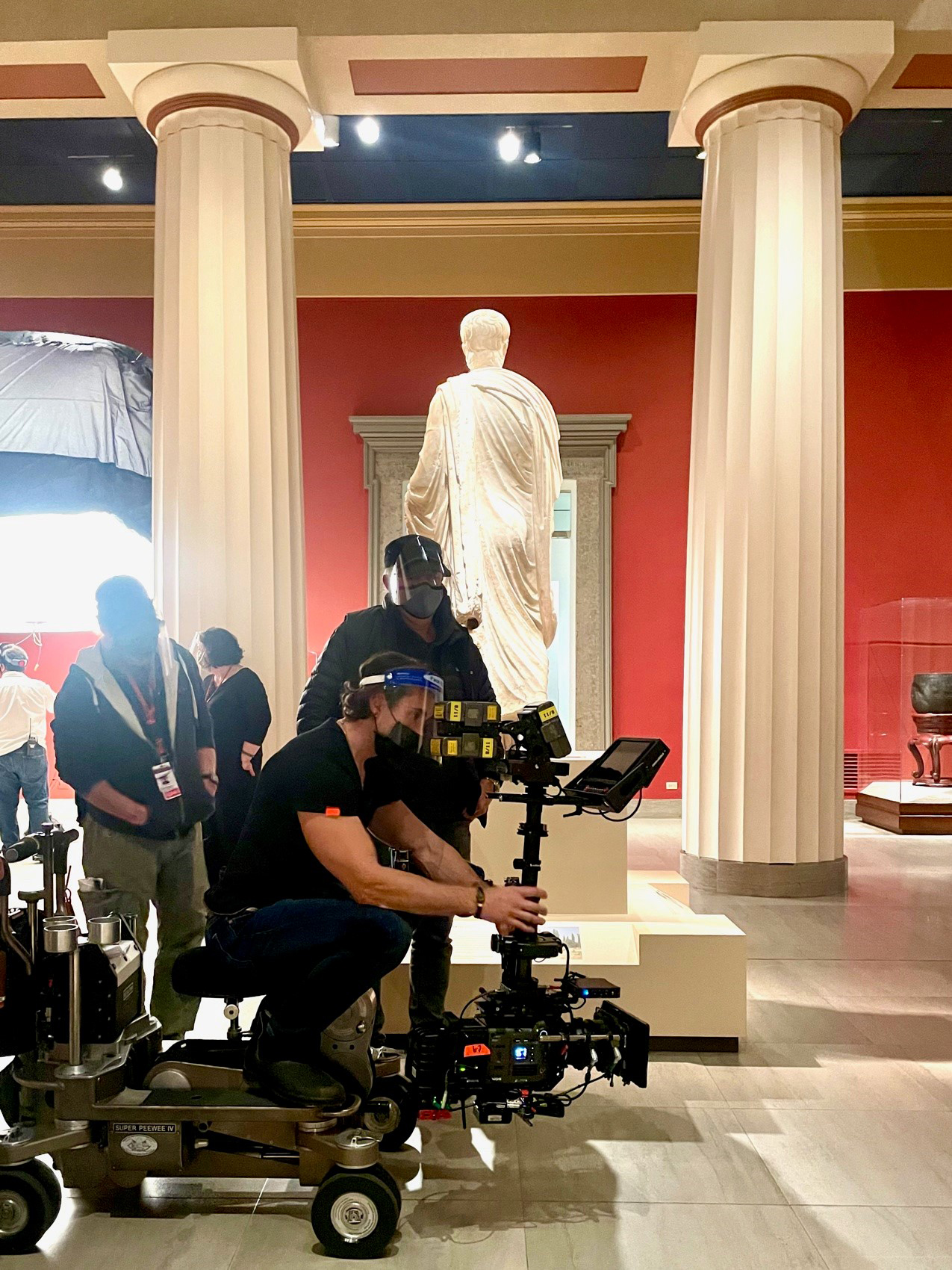 Select scenes in that first circle, featuring mineworkers risking addiction to painkillers, used Supreme Prime Radiance lenses to represent the effects of addiction. “They have a particular blue-green sort of cold flare,” Varese says. “Dopesick is about the opioid epidemic and there are some characters that become heavily affected by OxyContin, and I felt that night exteriors benefitted from Radiance. They have these blue-green highlights that are very organic to the scene. Instead of being careful about flares, you embrace them. You’re pointing the lens at sources of light… you lower the camera, so you see the streetlights, or you see the headlights of a car.”

In the more controlled world of legal and enforcement people, Varese imagined “a world like the Michael Mann movie The Insider, which has these extreme close-ups with out of focus in the background, that Dante [Spinotti] did.” Here, Varese refers to a conversation with digital imaging technician Daniele Colombera, whose thoughts influenced Varese’s choice of large format. “He said ‘the large format will give you the shallow depth of field, with the out of focus background, that will allow you to concentrate on the drama of this particular person, as opposed to getting lost in the environment.’ I said, ‘Great’.”

Varese defines his third circle, depicting the wealthy decisionmakers behind the pharmaceutical company, as being influenced by Kubrick’s Eyes Wide Shut. “It’s the wrong subject matter,” he says, “but it suggests this golden, rich undertone of the pharma companies.” Here, Varese leveraged the shallow depth of field to create “a disconnection from reality, with twinkling lights and the rich people.”

The 94 days of principal photography relied mainly on ZEISS Supreme Primes and all three Cinema Zooms, including the 15-30mm, 28-80mm and 70-200mm lenses. “The zooms are wonderful,” Varese recalls. “They match the primes… and they gave us the ability to change the focal length very quickly, because it’s a very dramatic scene and you don’t want the actors waiting the thirty seconds it takes.” Unusually, the production uses on-camera zooms, “a very seventies thing,” as Varese puts it. “Like The French Connection. It was done very gently – a little more on episodes three and four because the story starts to get more intense, the characters get out of control, and we see the drug addiction and the dealers. It was very subtle element in the narrative.” 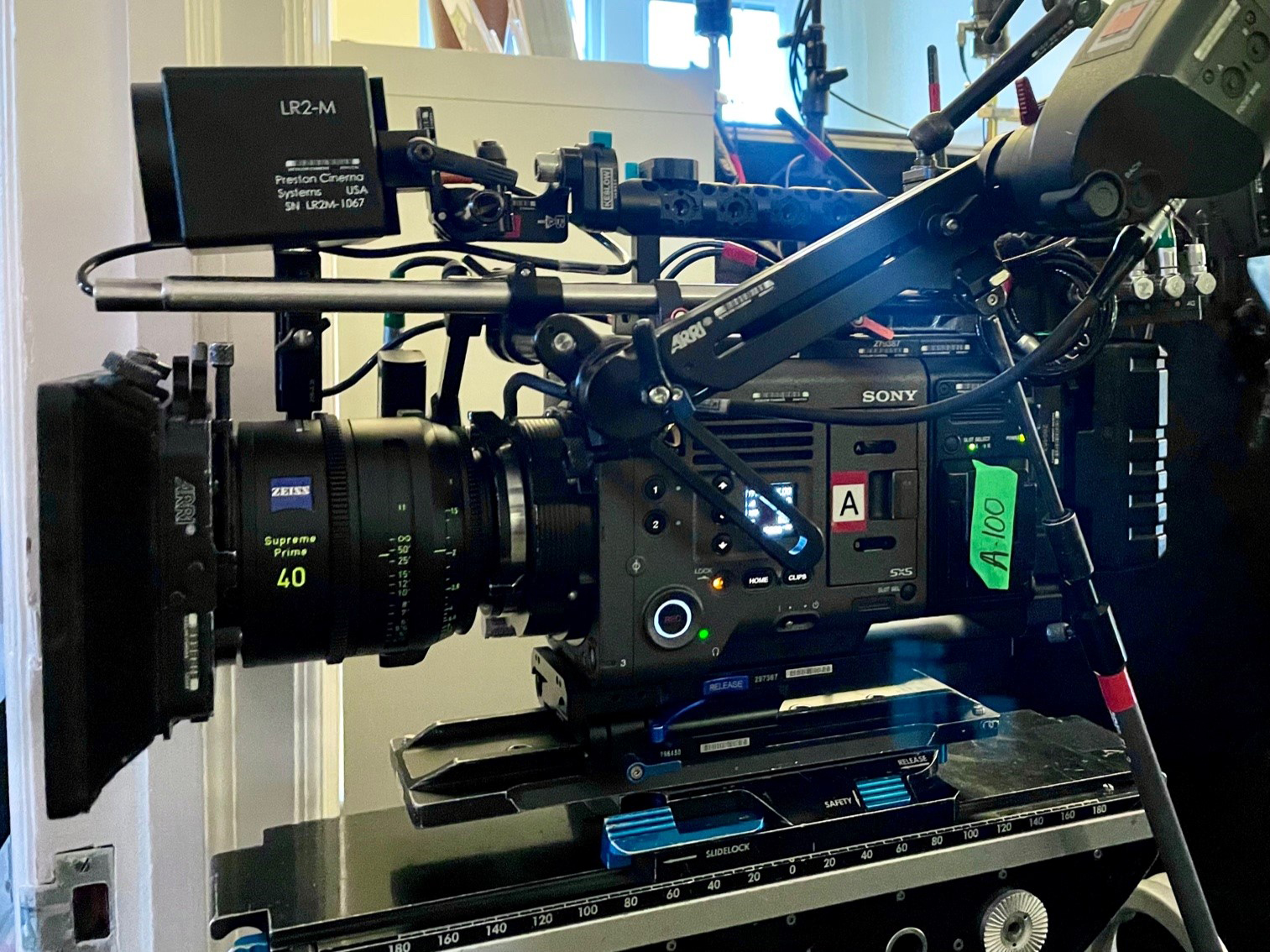 Combining three different ranges – Supreme Primes, Radiance and Cinema Zoom lenses – on one production might raise concerns over hard-to-handle variation in the image, but Varese reports no such concerns. “That’s the beauty of the ZEISS architecture. I had two sets of Supremes and I ordered half a set more because I had a third camera that was doing pickups. We ordered them, made sure they’re fine after travelling from California to Richmond, Virginia, and they’re absolutely seamless. Not even with the Radiance did we have to do something different in grading – they’re different, but that’s their purpose.”

The success of Sony Venice and ZEISS Supreme Primes is one Varese is keen to repeat. “I think my next project is going to be Sony Venice and ZEISS. Those two work together very well. It’s a very organic combination.” And in the end, that helped Dopesick achieve its finely balanced cinematic reality. “I didn’t want to make it about the cinematography. I wanted to make it about the characters.”

For the ZEISS Q&A with Checco Varese ASC visit: https://lenspire.zeiss.com/cine/en/article/dopesick

For its customers, ZEISS develops, produces and distributes highly innovative solutions for industrial metrology and quality assurance, microscopy solutions for the life sciences and materials research, and medical technology solutions for diagnostics and treatment in ophthalmology and microsurgery. The name ZEISS is also synonymous with the world’s leading lithography optics, which are used by the chip industry to manufacture semiconductor components. There is global demand for trendsetting ZEISS brand products such as eyeglass lenses, camera lenses and binoculars.

With a portfolio aligned with future growth areas like digitalization, healthcare and Smart Production and a strong brand, ZEISS is shaping the future of technology and constantly advancing the world of optics and related fields with its solutions. The company’s significant, sustainable investments in research and development lay the foundation for the success and continued expansion of ZEISS’ technology and market leadership. ZEISS invests 13 percent of its revenue in research and development – this high level of expenditure has a long tradition at ZEISS and is also an investment in the future.

With over 32,000 employees, ZEISS is active globally in almost 50 countries with around 30 production sites, 60 sales and service companies and 27 research and development facilities. Founded in 1846 in Jena, the company is headquartered in Oberkochen, Germany. The Carl Zeiss Foundation, one of the largest foundations in Germany committed to the promotion of science, is the sole owner of the holding company, Carl Zeiss AG.  Further information at www.zeiss.com

ZEISS Consumer Products combines the company’s business with camera and cine lenses, binoculars, spotting scopes and hunting optics. The unit is allocated to the Consumer Markets segment and is represented at sites in Oberkochen and Wetzlar.