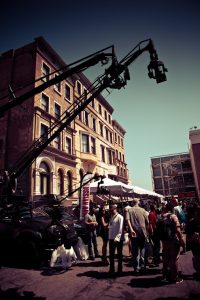 The Exhibits at Cine Gear Expo 2017 will be open on Friday, June 2 and Saturday, June 3, at Paramount Studios in Hollywood, California. Attendees can look forward to a major film screening, filmmaker panel discussions, groundbreaking techniques and new equipment premieres from nearly 300 exhibitors. The Event will be packed with members of the world’s top motion picture, video, and new media community providing the perfect setting for networking with colleagues and getting the first look at newly released filmmaking technology.

At 7pm on Friday, Sony will present an exclusive screening of Phil Keoghan’s film Le Ride, preceded by a special announcement. The documentary focuses on a small under-resourced, untested team from New Zealand and Australia who lined up in Paris to ride in the toughest sporting event on earth, The Tour de France in 1928. The remarkable underdog story was brought back to life by Phil Keoghan who rode an original 1928 steel bicycle with no gears, and retraced the exact route covering an average of 150 miles a day, completely circumnavigating France in just 26 days. Le Ride was selected for South by Southwest, was the second highest grossing film at the New Zealand Film Festival, won the Festival Favorite Award at the Louisville International Film Festival, won the Best Director Award at the American Documentary Film Festival, and will have a wider international theatrical release this summer.

New cameras will be in abundance at this year’s exhibit, with Panasonic unveiling a small and lightweight “mystery cinema camera”, with low-cost media and workflow, and high-end cinematic imagery. More can be learned at the Panasonic presentation on Friday from 4:15 – 5:15 pm in the Paramount Theater. Sony will be displaying its current and future professional motion picture imaging technologies, including 4K anamorphic and new 4K and High Dynamic Range technologies. RED Cinema visitors can check out their DSMC2™ accessories, compatible with the SCARLET-W™, RED EPIC-W™, WEAPON® 8K S35 and WEAPON 8K VV. New for Blackmagic Design is the URSA Mini Pro 4.6K, a professional digital film camera that combines the incredible image quality of URSA Mini 4.6K with the features and controls of a traditional broadcast camera.

CineGear offers a close-up look at the world’s great lens brands. Cooke will reveal its new Cooke Anamorphic/I 45-450mm T4, with 2X squeeze. The newly launched “MK” Series cinema lenses from the Optical Devices Division of FUJIFILM, along with the UA Series of HDR zooms, will also make their Cine Gear debut. Carl Zeiss’ new ZEISS Compact Prime CP.3 lenses will be on display, offering the perfect combination of high-image quality and reliable usability. They exhibit the clean, crisp characteristics ZEISS is known for, together with an interchangeable mount system and full-frame coverage. Additionally, CW Sonderoptic will introduce the Leica Thalia large format spherical lenses and Leica M 0.8 lenses.

Schneider-Kreuznach will be premiering the Radiant Soft Diffusion Filter made to smooth skin imperfections with minimal effect on contrast,

Lighting professionals are sure to get their fix of new and exciting equipment. Known for innovative remote phosphor lighting BB&S Lighting will display their Pipeline Bank fixtures including a brand new 1’ 4-bank and 2’ 2-bank, joining 3’ and 4’ 4-banks in 3200°, 4300°, 5600°. Cineo Lighting plans to make an announcement focusing on a collaboration that combines NBCUniversal’s decades of production and broadcast experience with their award-winning proprietary technologies. DoPchoice and The Rag Place will be showing some exciting new products including the RABBIT-EARS, OCTA 7′ and SNAPBOX.

Among the crowd will be rental house VER, highlighting their Enhanced Environment process which utilizes LED walls and projection to light talent and fixtures in shot with amazing authenticity. Another out of the box company, Timecode Systems, will be showcasing not only a new, cost-effective way to streamline multi-camera production workflows using the UltraSync ONE, but also demonstrating how its system can now be configured to offer efficiency benefits to professional VR workflows.