Munich: September 22, 2019 at the Bavaria Musikstudios 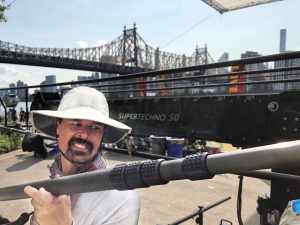 To download a large version of the image, first, click on the image above.  Then right-click (Windows) or hold the CTRL key and click (Mac) directly on the image and Save.

K-Tek, the company that introduced the first graphite, telescoping boom poles, innovative Stingray sound bags, and more, presents events especially aimed at anyone working in professional audio as a boom pole operator, sound mixer or sound utility. The events are complementary and refreshments/snacks will be served.

Ken Strain has worked as a boom op in Hollywood and New York City for the past 25 years and also has a background in comedy so he keeps the session fun and light, while still sharing a treasure trove of useful knowledge. His prolific resume includes top television series and films including: Good Girls, The Goldfinch, Silicon Valley, Parks and Recreation, and House.

For an informative and lively panel discussion, K-Tek has brought together some top names in the business with a diverse range of projects. Special Guests include Production Sound Mixer: Don Hale, CAS (known for Step Into Liquid, Dust to Glory, CBS News: 60 Minutes and Sunday Morning, as well as various National Geographic projects. Also on the panel will be renowned Boom Op Kevin Cerchiai (Iron Man 3, Bad Boys for Life, Transformers & Season 9 of The Walking Dead. Also sharing his expertise will be Production Sound Mixer: Chris Howland, CAS. His extensive list of credits includes CBS’ S.W.A.T, Adam Sandler’s 100% Fresh on Netflix & Once Upon a Time in Hollywood.

A very special guest, Mark Ulano will be a panelist in Munich. Winner of the Academy Award® for Best Sound on Titanic (1997), Mark has worked on numerous other megahits, including: From Dusk Till Dawn, Iron Man, Inglorious Bastards, Kill Bill, Django Unchained, Rocky Balboa, and many more.

About K-Tek
Since its founding in 1996 by Manfred N Klemme, K-Tek has supported the audio world with innovative tools to make the sound engineer and boom operator’s jobs smoother. With a passion for audio, Manfred’s first mission was to design and manufacture a line of U.S. made boom poles that were lightweight, strong and so audio friendly that folks took notice. Mission accomplished: in 1999 K-Tek won a Technical Achievement Award from the Academy of Motion Picture Arts and Sciences for the Klassic Boom Pole. Since then, K-Tek has earned many other awards and the reputation of making elegantly designed and beautifully constructed, audio-centric products including: Avalon graphite and aluminum boom poles, shock mounts, Shark Antenna mount and Fuzzy & Topper windscreens. K-Tek’s growing Stingray line includes, Sound mixer bags, Waist Belt, a back-saving Audio Harness, plus accessory bags and pouches. Visit: www.ktekpro.com.

Information Prepared by Lewis Communications: susan@lewiscommunications.net
For additional photos and other news, please go to www.aboutthegear.com