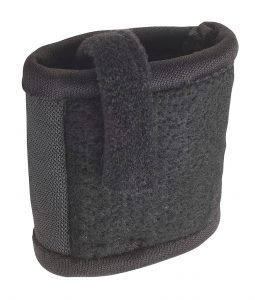 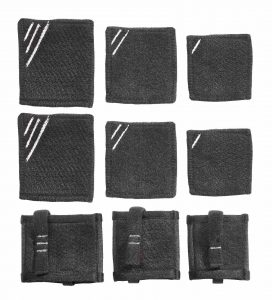 Wireless microphone manufacturers have made great strides in producing smaller and more powerful transmitters for their devices that are often body worn. However, this technology can generate uncomfortable heat when positioned next to the body. To solve this issue, K-Tek designed HeatBlock transmitter pouches and handy swatches of the same fabric, HeatBlock Pieces.

After extensive research and field-testing, K-Tek devised the new Stingray HeatBlock line. The secret is a patented, heat resistant material that is both soft to the touch, and flexible enough to comfortably be worn against the body. The proprietary three layer material is specifically engineered to withstand a continual temperature of up to 240°C (464F°), well above the range at which the electronics are specified.

The results are positive, earning praise from professionals. “Since I’ve been using HeatBlock pouches I no longer hear complaints from the actors, about the transmitters being too hot,” explains award-winning Production Sound Mixer, Steven Tibbo C.A.S., who is known for his work on features, documentaries and TV series such as Modern Family.

This advanced material is soft and comfortable to wear against skin yet offers superb insulating characteristics to eliminate the discomfort associated with wearing wireless transmitters. A series of three pouches snugly encase most popular transmitter brands. Fabricated without protrusions or sharp corners, they can be used with or without transmitter clips. What’s more, every pouch and HeatBlock Piece is meticulously hand-sewn at the K-Tek headquarters in California, USA.

Available in three sizes, there’s a Stingray HeatBlock Pouch to fit most popular microphone transmitters, including the Zax ZMT and the Lectro SSM, SMV and SMQV models. MSRP is a cost-friendly $30 each. Heatblock Pieces are sized to correspond with the Pouches and come in a set of six with two of each size also for $30.

Since its founding in 1996 by Manfred N Klemme, K-Tek has supported the audio world with innovative tools to make the sound engineer and boom operator’s jobs just a bit smoother. With a passion for audio, Manfred’s first mission was to design and manufacture a line of U.S. made boom poles that were lightweight, strong and so audio friendly that folks took notice. Mission accomplished: in 1999 K-Tek won a Technical Achievement Award from the Academy of Motion Picture Arts and Sciences for the Klassic Boom Pole. Since then, K-Tek has earned many other awards and the reputation of making elegantly designed and beautifully constructed, audio-centric products including: Klassic & Avalon graphite and aluminum boom poles, shock mounts, Shark Antenna mount and Fuzzy & Topper windscreens. K-Tek’s growing Stingray line includes, Sound mixer bags, Waist Belt, a back-saving Audio Harness, plus accessory bags and pouches and bag accessories. Visit: www.ktekpro.com.

For additional photos and other news, please go to aboutthegear.com