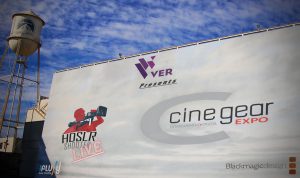 HDSLR Shooter will stream a talk show hosted by Clint Milby live from Cine Gear Expo 2017 at The Studios at Paramount in Hollywood. The stream is brought to you by VER, with additional sponsorship from Blackmagic Design and produced by iFluxy New Media.

Clint Milby, founder of HDSLRShooter.com is excited about the stream stating, “HDSLR Shooter has been covering Cine Gear for years now, but with this live stream we will be able to offer the very best parts of the show instantly from Facebook and Youtube. Not only will we still get the latest news on gear, but also conversations with some of the very best filmmakers in the industry in real time.”

The show will include live interviews with a number of industry professionals, including cinematographer/director Michael Goi, ASC, who will talk about his work on FX’s hit American Horror Story, as well as cinematographer and ICG Local 600 President Steven Poster, ASC.

Manufacturers who will appear on the show include Panasonic, who will announce a brand new camera in their VariCam line, as well as Canon, who will debut their new C200 Cinema Camera. Blackmagic Design will present a panel of filmmakers to discuss working with the Ursa Mini Pro, and cinematographer, photographer and Sony Artisan Jeff Berlin will discuss working with the new Sony Alpha 9.

VER offers the world’s largest inventory of top cameras and lenses, backed by experienced prep and engineering facilities. They will have their very own Paul Kobelja on the show to talk about VER and how they can help filmmakers achieve their visions.

HDSLR Shooter Live From Cine Gear Expo will stream from Booth B101 on Friday, June 2 through Saturday, June 3rd during the exhibition portion of the show. Viewers can access it for free via their Facebook and YouTube pages:

Cine Gear Expo will also host a live stream on their Facebook page:

For more information about HDSLR Shooter, visit their website at http://HDSLRShooter.com

For more information about VER, visit their website at https://www.VER.com

For more information about iFluxy New Media, visit their Facebook page at https://www.Facebook.com/iFluxyNewMedia