Writers will pitch women-centric content to HBO and more 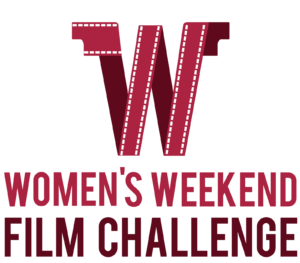 Women’s Weekend Film Challenge (WWFC) has announced the eight fellows chosen for its inaugural pilot accelerator. These eight emerging writers were selected out of 723 applicants.

Before pitching, fellows will attend a three-week intensive training, where they’ll learn directly from industry insiders, including Elle Johnson, co-showrunner of “Self Made”; Matthew J. Lieberman, supervising producer of “Queen of the South”; Christine Walters, development executive, writer and producer, whose credits include “Tacoma FD” and “Full Frontal with Samantha Bee”; public speaking coach Samara Bay, best known for dialect work with clients Gal Gadot and Rachel McAdams; and entertainment lawyer Anuj Gupta. The program will culminate with a week of pitching to studios, production companies and producers who are looking for new material and/or new writers. 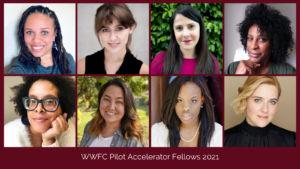 “We enlisted the help of executive producers, development executives and TV writers to judge the 24 semifinalist pilot scripts. Already, some of those judges requested meetings with writers whose work they read and evaluated. This is so exciting because we’re not only helping to advance the careers of the writers who applied to our program; we’re also helping these producers find new talent,” WWFC co-founder Tracy Sayre said.

“The scripts chosen for this accelerator run the gamut from comedy to sci-fi to contemporary and period dramas. The one thing that unifies all of these scripts is the pure talent of these writers and their passion for telling women’s stories,” WWFC co-founder Katrina Medoff said. 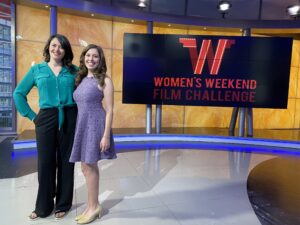 WWFC was founded by Medoff and Sayre in 2017 to promote gender equity behind the camera and on screen. The organization is best known for its signature film challenge that has produced 30 short films with more than 700 professional female filmmakers. WWFC also hosts a popular virtual workshop series featuring Hollywood powerhouses in every role of production.

The pilot accelerator is designed both to help emerging writers advance their careers and to increase the representation of women and non-binary people in television. The program, geared toward writers with strong, completed pilot scripts, provides fellows with direct access to decision-makers in the industry.

This accelerator is sponsored in part by SanDisk Professional and Final Draft. For more information, visit womensweekendfilmchallenge.com/accelerator-program.

Danielle Nicki (“Welcome to Nirvana”) has focused on the craft of screenwriting for nearly a decade and enjoys creating flawed women of color protagonists with interesting and diverse life experiences not often seen on screen. She is a Nicholl Fellowship quarterfinalist, an Austin Film Festival and Cannes Film Festival finalist, and was recently named one of International Screenwriters Association’s Top 25 Writers to Watch in 2021.

Joanne Thomson (“Spinner & Marie”) is an actor, writer and director from Glasgow, Scotland. As a Royal Conservatoire of Scotland graduate and a BAFTA LA Newcomer, she has worked across BAFTA-winning and Emmy-nominated series with BBC, Sony, Amazon and Netflix and has directed internationally award-winning theater. Her writing has placed in several Screencraft competitions as well as making the BBC Writer’s Room Top 2%. Her most recent film, which she will also co-direct, is currently shortlisted for BFI funding.

Kate Torgovnick May (“Something Sweet”) is a television writer who’s fascinated by people and the things that make them tick. She’s drawn to unexplored female worlds — the staff lounge of a fertility clinic, the sugar baby conference circuit. A staff writer on “NCIS” and consulting producer on The CW’s “Hellcats” — and a former journalist who worked for JANE Magazine, The New York Times and TED Talks — Torgovnick May’s work is grounded in research and a desire to understand people.

Kenyetta Raelyn (“Tenth”) is an award-winning LA-based screenwriter. Obsessed with the Gilded Age and early American industrial tycoons, she writes vividly about capitalism, wealth and privilege and their intersection with race and class. Last year, she was a participant in the Blacklist/Women in Film Episodic Lab and landed in the top 10% of the Nicholl Competition. In 2019, Raelyn was a part of Meryl Streep’s The Writers Lab NYC and the ScreenCraft Drama Feature Competition winner.

Ramou Sarr (“Killing It”) is a writer in Los Angeles. She created, wrote and starred in the web series “Brunch,” about two Black women pondering their neuroses over eggs and mimosas. She has written several personal narrative essays, two Glamour magazine cover stories and one creepy short story about a missing Midwest teen. She has a background in indigent criminal defense and is passionate about telling the stories of dynamic, complicated and often messy women.

Samantha Wilson (“Foresight”) was born and raised in Las Vegas, Nevada. After graduating from DePaul University with a degree in screenwriting and photography, she moved to Los Angeles, California. Her time as an assistant in the film and television industry morphed into a career as a script reader and story analyst, working for high-profile screenwriting contests and a major studio. She enjoys writing character-driven dark comedy, dramedy and drama, often with a grounded, genre twist.

Spade Robinson (“Little Shop of Daughters”) is an award-winning writer and director with experience that spans feature film, documentary, television, commercial and theater. Robinson is a master’s alumnus of USC’s School of Cinematic Arts, where she emphasized writing and directing. Robinson has directed several short films and written a host of television pilots and feature screenplays. She has twice been a finalist for the Sundance Episodic Lab, and she’s been a finalist for Film Independent Episodic Lab and AFI’s Directing Workshop for Women.

Vivian Kerr (“Five Points”) is an actor, writer, producer and director. In 2020, she was a finalist in Sony Pictures TV’s Rising Storytellers Search with her pilot “Five Points,” about the female-led gangs of 19th-century New York, which is also in the 2021 Stowe Story Lab. Her feature debut, “SCRAP,” is currently in post-production. The script was a Top 10 finalist in Final Draft’s Big Break. It stars Anthony Rapp and Lana Parrilla and will premiere in 2022.

Women’s Weekend Film Challenge (WWFC) works for gender equity by creating opportunities for women to bring their leadership, talents, and stories to the forefront of the film industry.

In its signature film challenge, WWFC places professional filmmakers on crews to write, shoot and edit a short film in one weekend and provides top-of-the-line equipment, insurance and workshops. This career-building opportunity is free for participants. Since its first challenge in January 2018, WWFC has worked with more than 700 women to produce 30 short films, which have been accepted to more than 90 festivals. This grassroots, bi-coastal movement combats the gender imbalance of the film industry by providing an intensive networking experience and telling women’s stories on screen.

WWFC recently launched its pilot accelerator to help emerging writers advance their careers and increase the representation of women and non-binary people in television. The program, geared toward writers with strong, completed pilot scripts, provides fellows with direct access to decision-makers in the industry.