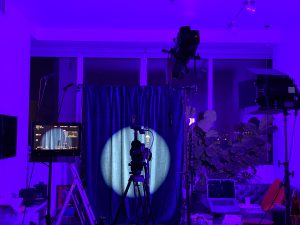 Amanda Dreschler and Michael Livingston didn’t let a detour like the COVID-19 pandemic shunt their creativity. Just the opposite— they channeled their isolation experience into inspiration and pulled out the stops—writing a script, learning the majority of crew positions, and sharpened their directing, acting and editing skills. Plus they got by with a little help from their friends— all remote, all COVID safe.

Together they wrote the script mirroring the very personal emotional and physical experiences they were undergoing, measured with a healthy dose of creative expression that adds an undertow of mystery that really keeps the 19-minute story moving. 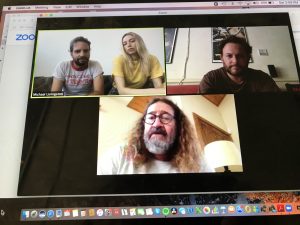 They made the most of their own “natural resources” using their Hollywood rooftop apartment as the location. A call to Michael Valinsky nabbed their long-time friend as Executive Producer and he in turn reached out to legendary Steadicam operator, turned DP, Dan Kneece, and they had their cinematographer. Michael Bravin at Canon added a new Canon C300 MKII and Sumire primes that they called a “godsend”. 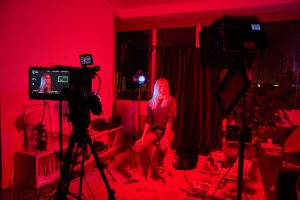 The previous year, Kneece had used the new BB&S Area 48 Color on a soon to be released indie film, so he was happy when BB&S again made the lights available. “The BB&S Area 48 Color was definitely our main light,” says Livingston, “We used it in almost every scene. Even in those that were primarily natural daylight, we almost always had the Area 48 bouncing for some extra fill. We shot against bright windows in full daylight for the workout scene at the beginning of the film. The Area 48 gave enough power to bring up the exposure in the apartment close to the exterior so we didn’t blow out our windows.” 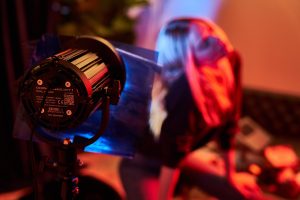 “The colors on the Area 48 were stunning and essential in getting the neon look of the film. We would never have been able to achieve the bright colored sequences with gels. In our lava lamp scene we were able to tune the colors to an almost exact match with our lava lamp and dim it down to look as if the lamp cast a glow on our faces. Without the Area 48 we wouldn’t have been able to fine-tune that scene the way we did.” Kneece concurred, “The power, versatility and flexibility of this light is incredible. It has the adjustability to match almost any other colored source.” 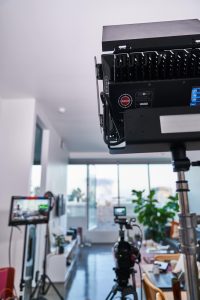 Area 48 Color in the apartment location

Matching was important to Livingston who was co-directing, working camera and editing. “The Rotolights can roll through daylight to tungsten, but they don’t have the color range of the Area 48. The BB&S lights had such precise controls we were always able to match the Rotolights. The green shift control for the daylight was also very helpful. Our apartment windows have a slight green tint to them, and we were able to match that light with the Area 48.

Although Dan was in Marina Del Rey while Amanda and Michael were across town, the team safely moved forward remotely without missing a beat. “The waveform was a saving grace as we bounced the signal over two laptops so we could collaborate”, says Kneece. “By pointing Michael’s laptop at the production monitor, working on this film didn’t seem much different that other films when you’re working from video village on a normal set. The process actually worked really well.”

Small team or not, the goal was to get a high-end look. Peering into the psychological states of the characters called for numerous close-ups especially on the co-director/lead character, played by Amanda Dreschler. Capturing her gossamer complexion has been a challenge on many of their films. “We’re always experimenting with different make up, different lighting,” explains Michael. “This time around we found it very easy to get good beauty shots with the Area 48. The quality of light that comes from it is so soft, especially with the soft box, it gave a very luminescent quality to our close ups. With Dan’s help we lit the scene the way it needed to look, and the light just bounced beautifully off her skin—it did all the work for us.

The lava lamp scene was critical. Kneece explains, “Lava lamps by nature are not the most precise light sources so thank goodness the Area 48 Color is. We were able to match the lava lamp perfectly and use the Rotolight to make up the difference with a bit of gel. The trickiest part was positioning the camera, lights and actors so they were attractively lit and photographed without shadowing them from the fixture or getting unwanted light on the lava lamp or their faces. It was a very precise shot to make work.”

“The color grade also helped bring everything out to its full potential”, adds Livingston, “but the ultra soft Canon Sumire lenses and the Area 48 is an A+ combination. If you’re looking for good beauty work it certainly gets Amanda’s seal of approval.

They also selectively used harder LED lights. Livingston says, “The Force-7 is a beast of a light but highly controllable so it was great for our shooting limitations. To create the spotlight in our singing set up we had it behind the camera pretty far back frоm the set (as far as we could manage in our apartment!) and were able to get a perfect circle on our backdrop. It also acted as a backlight in the sequence where Amanda is dressed up as the raven. We could spot it down to a pinpoint and get a perfect kick on the back of her hair and feathers. It was subtle, but it’s the details that make all the difference.”

“The Compact Beamlight was fantastic, especially under shooting conditions where we didn’t have any crew or a lot of space. It was perfect for hair lights and came in handy anywhere else we needed a kick. One set up in particular was for the finale which Livingston calls the “floating iPhone key shot,” explaining, “We used the CBL-1 as a rim to simulate the sunset glinting off of the phone on our white screen. Using the dimming control we were able to be very precise about the amount specular highlight we were getting.”

Dan Kneece has been on the set of literally hundreds of films, big and small. His response to the first one filmed in quarantine? “As beautiful as this movie is, it was all done in a practical apartment using house power and we didn’t blow a breaker once. Amazing really.”

We Can’t Go On, written, directed, and starring Amanda Dreschler and Michael A. Livingston was shot and completed during the 2020 Covid-19 quarantine. View it at: https://vimeo.com/447406368