Hollywood, California, May 13, 2016—Cine Gear Expo pulls out all the stops to share the latest art and craft of filmmaking. This year’s event, being held at Paramount Studios June 2-4, 2016 offers a full schedule with screenings and panel discussions of coveted feature films, plus Film Competition Finalist showings of Student Shorts, Independent Shorts, and Commercials/Music Videos.

Thursday, June 2nd, kicks off the Cine Gear competition finalist screenings in Paramount’s Sherry Lansing Theatre. Winners in each category will receive an Ursa Mini 4.6K from Blackmagic Design at the awards presentation on Friday evening. Screening tickets may be purchased individually or via a Film Series Pass for all screenings for $25 at: http://www.cinegearexpo.com/la-expo-passes-and-tickets 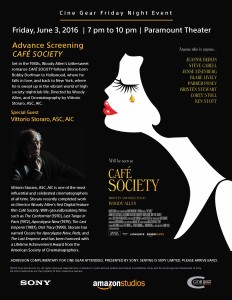 At 7pm Friday evening June 3, Sony presents an exclusive special screening of Woody Allen’s soon-to-be-released Café Society, in the state-of-the-art Paramount Theatre. The bittersweet romance set in the 1930’s follows Bronx-born Bobby Dorfman to Hollywood where he falls in love, and back to New York where he is swept up in the vibrant world of high society nightclub life. After the screening there’s a must-see Exclusive Q & A discussion including three-time Academy Award-winner Vittorio Storaro ASC, AIC.

Saturday evening June 4, at 6pm, promises to be another full-house when Sony presents a Special Screening of Mysteries of China. From Giant Screen Films (GSF), this feast for the eyes is a dramatic tour of an ancient empire, that will launch on October 7, 2016 in IMAX© and museum cinemas worldwide. Through the lens of one of the great archaeological events of the modern age, the discovery of the Terracotta Warriors and the First Emperor’s Tomb, Mysteries of China reveals the underlying story of how this world superpower came to be. Following the screening there will be an exclusive Q&A discussion with the filmmakers including director and producer Keith Melton and director of photography Reed Smoot, ASC, who bring unique perspectives to the needs of the largest cinema screens.

On June 4 and 5, visitors are also invited to attend a complimentary series of seminars and panel discussions conducted by esteemed equipment makers such as Arri, Sony, Panasonic, Blackmagic and Canon, as well as distinguished members industry associations including: American Society of Cinematographers, International Cinematographers Guild, and the Society of Camera Operators. Visit http://www.cinegearexpo.com/la-expo-premier-series for the schedule.

Gold or Silver all-access passes for guaranteed priority seating at Premier seminars and Screenings may be purchased at http://www.cinegearexpo.com/la-expo-passes-and-tickets. For Additional information, directions, and Free Cine Gear registration open until Midnight PDT, May 27, 2016, visit www.cinegearexpo.com
###
###