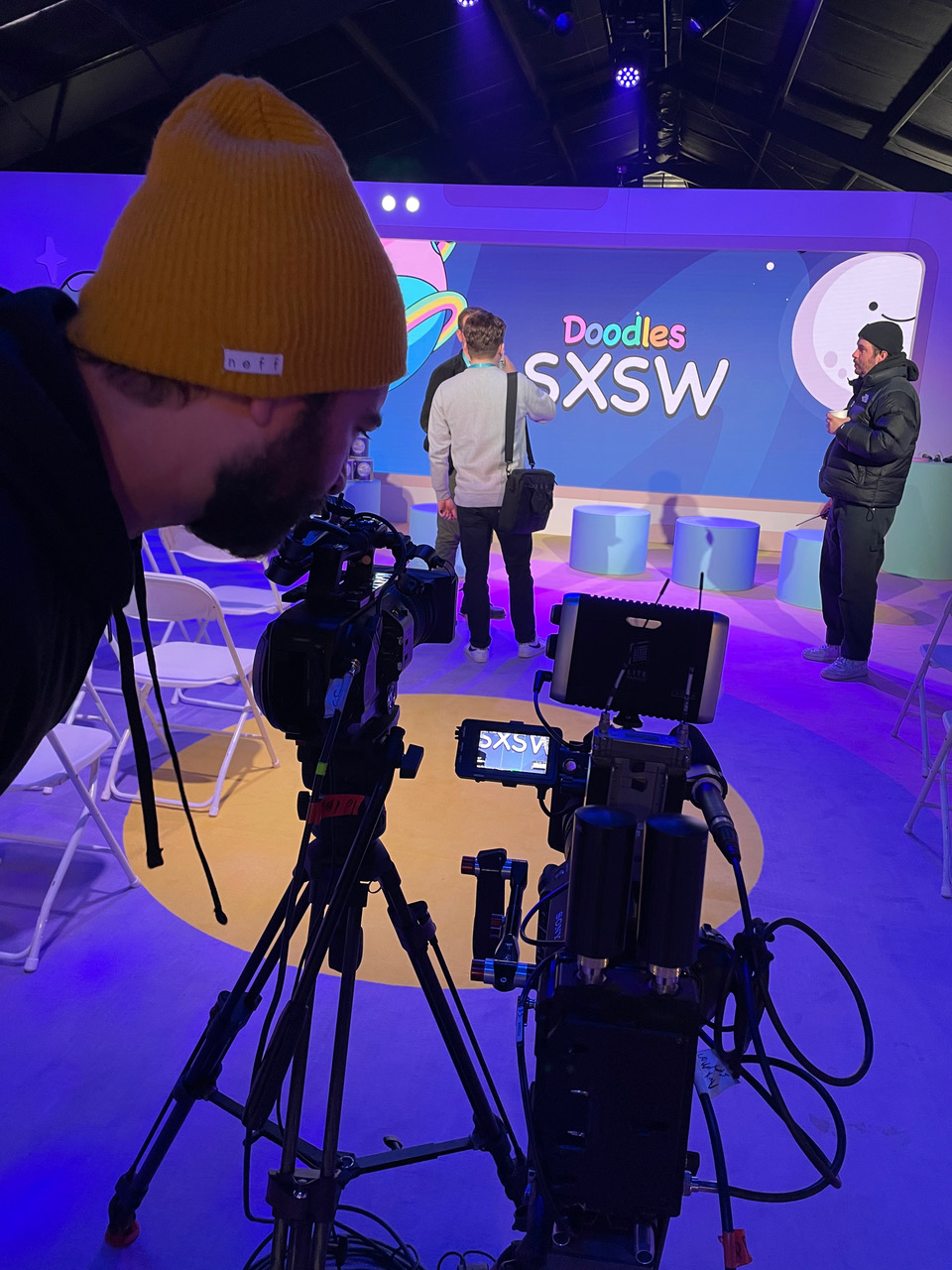 Victor Borachuk calls it an “RF free-for-all”.  He knows the Southby scene—he’s captured it through the lens for nearly a decade. Specializing in live coverage, his company, JupiterReturn has been streaming this and other events since 2006. “It’s the wild west out there,” he says.

He knew that to keep his clients happy there could be no dropouts in this haven for RF interference. This year he was ready to try out a new live transmission system, the Teradek Ranger.

His client, an agency representing an NFT company, Doodles, was doing an “activation” at the mega-event. With 248K Twitter followers and 450,000 on Discord, Borachuk was responsible for live content on all channels. They would be streaming an interview panel with the brand’s founders, a Q&A, and a live tour of the 100’ x 50’ warehouse including a gallery of live art unfolding and the all-important merch shop. 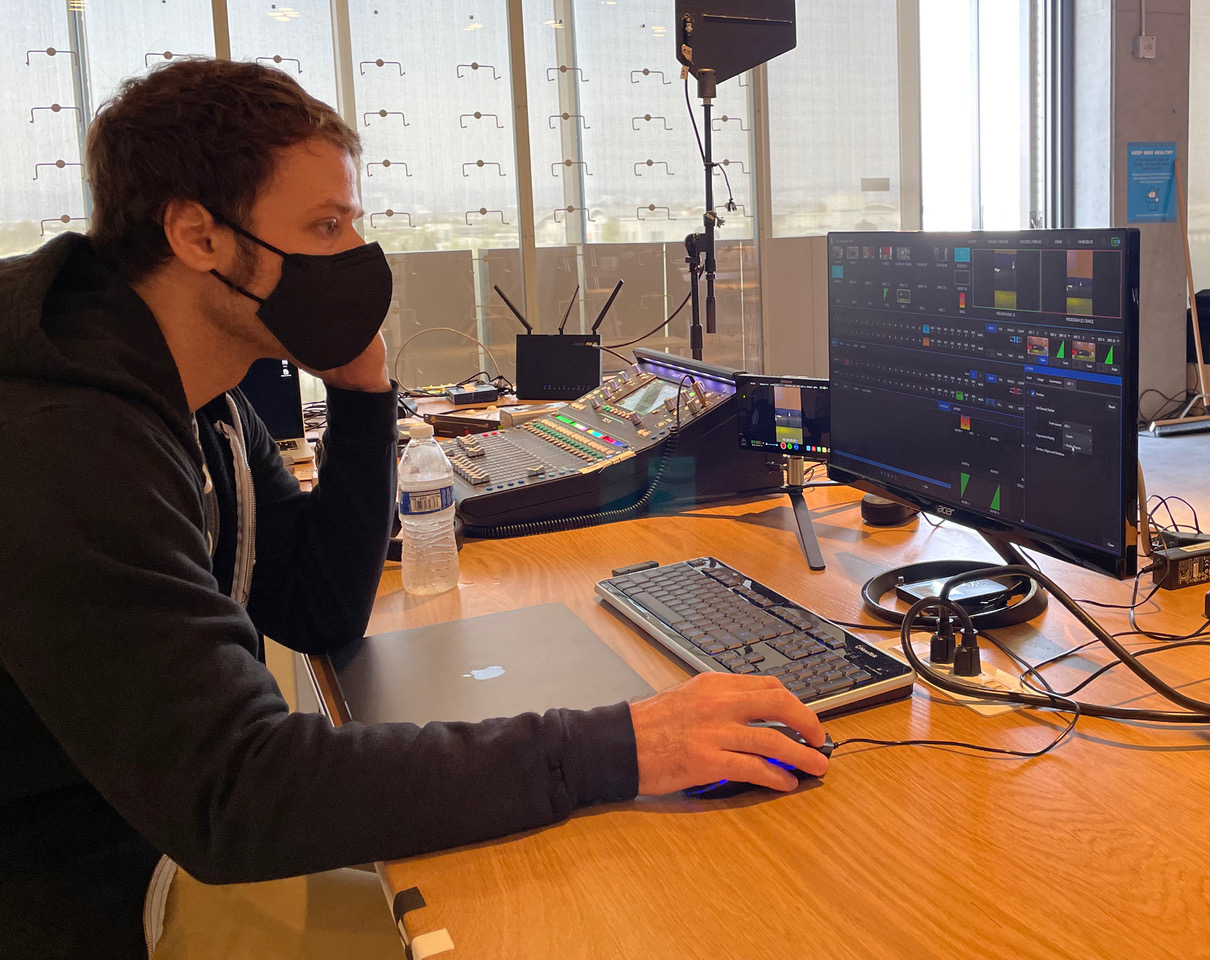 The day of the event they were one of many crews transmitting from a “house” on Trinity Street in downtown Austin. A line of Doodles holders wrapped around the block with iPhones in hand, streaming hints of what to anticipate inside.

Victor’s team was lean. His Camera/Producer duo carried a Sony FS7 outfitted ENG style with a light, shotgun mic and RF receiver. Meanwhile, he managed the line cut on a Tricaster TC2 Elite. To get the feeds into the Tricaster, they opted for the 1:2 Ranger set since they needed the robustness of the unit fine-tune controls for wireless channels. https://teradek.com/pages/ranger

At the venue Borachuk had the usual concerns about holding a consistent signal through the sea of frequencies. Would they be able to track from the cue outside and into the warehouse? Would the antenna reach the entire space including a tunnel to an adjacent side room? “I had never used this particular Teradek system before but, setting up the Ranger was simple—we were up and running in no time,” he says. “A big thing it solves are issues with mounting. When building the camera package there’s lots of outboard gear all over it. But this system is nice and well-built—with Gold Mount batteries and the backpack extension, it’s very streamlined.” Most importantly to him, the range held strong even shooting slightly out of line-of-sight outside the front door through obstacles, and although he had worried about it initially, the single receiver carried. “Throughout the space audio and picture were solid—there was no guessing like with other systems.” He appreciated the app setup that made it easy to own the frequency, adding “If there’s a drop it hooks up right away with seamless transition.”

Borachuk notes that the Ranger’s Zero latency was especially evident when they were on the move. For the session’s Q&A we intercut with a wired camera, and then followed the moderator through the crowd, streaming video and audio instantaneously. It was nice and smooth which is so important for live streaming. ”

In addition to live and remote streaming experiences, Victor Borachuk and his company JupiterReturn JupiterReturn.com produce and create original content for episodic narrative, arena specials and digital/broadcast hybrids. More information about streaming tools can be found at www.teradek.com

About Creative Solutions
Headquartered in Southern California, USA, Creative Solutions Division, Inc. (CS) designs and manufactures premium cine and broadcasting technologies used by production professionals in film, television, news, sports, live events, online streaming, and other media enterprises. A subdivision of The Vitec Group, CS is composed of Teradek, SmallHD, Wooden Camera and Lightstream whose products are available via branded websites and retail partners around the globe. More information can be found at www.cs.inc.

For additional inquiries, please reach out to pr@cs.inc